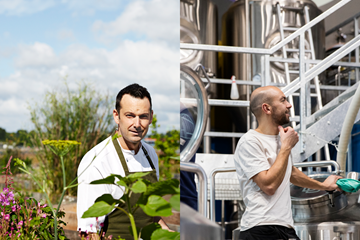 
With over 30 years of combined experience in the brewing and restaurant industry, Matt Orlando and Tiago Falcone, Chef and Brewer respectively of Broaden & Build, want to show a packed dining room the potential of flavor through food and beer.

Beer Maker’s Dinner will revolve around the creative collaborative relationship between a chef and a brewer, with matching food and beer, and set up like a classic "winemaker's dinner". But instead of a winemaker talking about his wines, Chef Matt Orlando and Brewer Tiago Falcone will talk the diners through the thoughts behind the beer and dishes.

They will talk about cooking with beer, brewing with food and the delicious potential in the by-products from the brewing process. Most importantly, you will taste what Matt and Tiago consider the future of food and beer, through six courses with accompanied by a beer pairing. Food and Beer, cooked and brewed on the premise and tailored to fit each other.

About Broaden & Build
Broaden & Build is an ingredient-focused brewery, casual restaurant, and bar in Copenhagen, created by the minds behind Amass Restaurant. With deliciousness and sustainability as the driving forces, Broaden and Build draws inspiration from local ingredients, while combining the creative processes of a chef and a brewer.

The menu is based on seasonal produce and will be revealed in the week leading up to the event.

The menu is designed after the produce of the season. We will therefore not have a planed menu until the week leading up to the dinner, so we can secure the best things for the season.